Reflecting on the 100th anniversary of the Tulsa Race Massacre 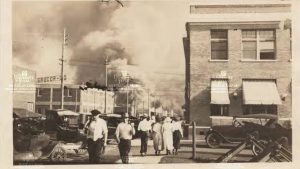 This year, Memorial Day has an extra significance. Monday, May 31, 2021 marks the 100th anniversary of the Tulsa Race Massacre.

On the morning of May 31, 1921, Tulsa’s Greenwood district was the wealthiest Black community in the United States. Popularly known as “Black Wall Street,” it was both a thriving neighborhood and a prosperous, bustling commercial center.

By the morning of June 1, it was gone.

Hundreds were dead, thousands were homeless, and nearly 200 businesses had been destroyed. Greenwood was in ashes.

The Tulsa Race Massacre has been called “the single worst incident of racial violence in American history.”

Chances are, you never learned about it in school. That wasn’t an accident; this event was intentionally kept quiet for many decades.

Keep reading for a brief account of the Tulsa Race Massacre and an array of resources kindly curated by our sister organization in Tulsa, The Oklahoma Center for Community and Justice (OCCJ).

Overnight, between May 31 and June 1, 1921, a mob of white people murdered hundreds of Black people and destroyed Greenwood

The violence was sparked after a 19-year old Black man, Dick Rowland, was accused of assaulting Sarah Page, a white woman who worked as an elevator operator in an office building in downtown Tulsa. Even though Page confirmed that Rowland was innocent and the charges against him were later dropped, an angry white mob gathered outside the courthouse where Rowland was being held – and then marched into Greenwood.

“They tried to kill all the Black folks they could see,” said survivor George Monroe, who was 5 at the time.

Viola Fletcher was 7 years old in 1921. On Wednesday, Fletcher– now 107 – testified before before members of a House Judiciary subcommittee, calling for justice and for the country to officially acknowledge the massacre.

“I still see Black men being shot, Black bodies lying in the street,” Fletcher said. “I still smell smoke and see fire. I still see Black businesses being burned. I still hear airplanes flying overhead. I hear the screams. I have lived through the massacre every day.” 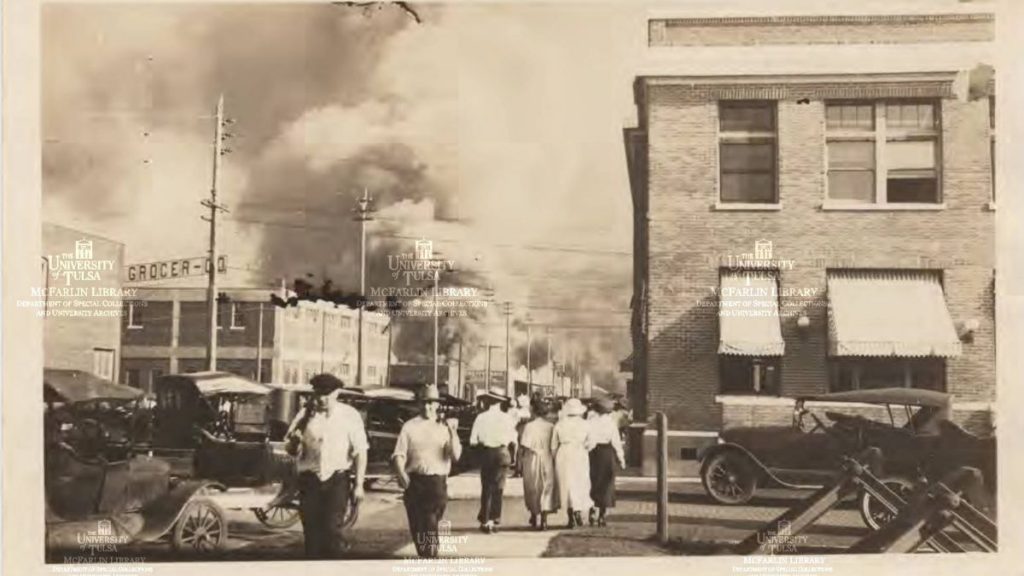 According to a 2020 report from Human Rights Watch:

In the span of about 24 hours between May 31 and June 1, 1921, a white mob descended on Greenwood, a successful black economic hub in Tulsa, Oklahoma then-known as “Black Wall Street,” and burned it to the ground. Some members of the mob had been deputized and armed by city officials.

In what is now known as the “Tulsa Race Massacre,” the mob destroyed 35 square blocks of Greenwood, burning down more than 1,200 black-owned houses, scores of businesses, a school, a hospital, a public library, and a dozen black churches. The American Red Cross, carrying out relief efforts at the time, said the death toll was around 300, but the exact number remains unknown. A search for mass graves, only undertaken in recent years, has been put on hold due to the Covid-19 pandemic.

Those who survived lost their homes, businesses, and livelihoods. Property damage claims from the massacre alone amount to tens of millions in today’s dollars. The massacre’s devastating toll, in terms of lives lost and harms in various ways, can never be fully repaired.

In the aftermath of the massacre, bodies were reportedly dumped in the Arkansas River or buried in mass graves. For weeks, hundreds of survivors were held in internment camps.

In the years that followed, no one was ever held accountable for the lives lost or the property destroyed.

The Tulsa Race Massacre destroyed lives and wealth, forever changing the trajectory of a once-thriving community 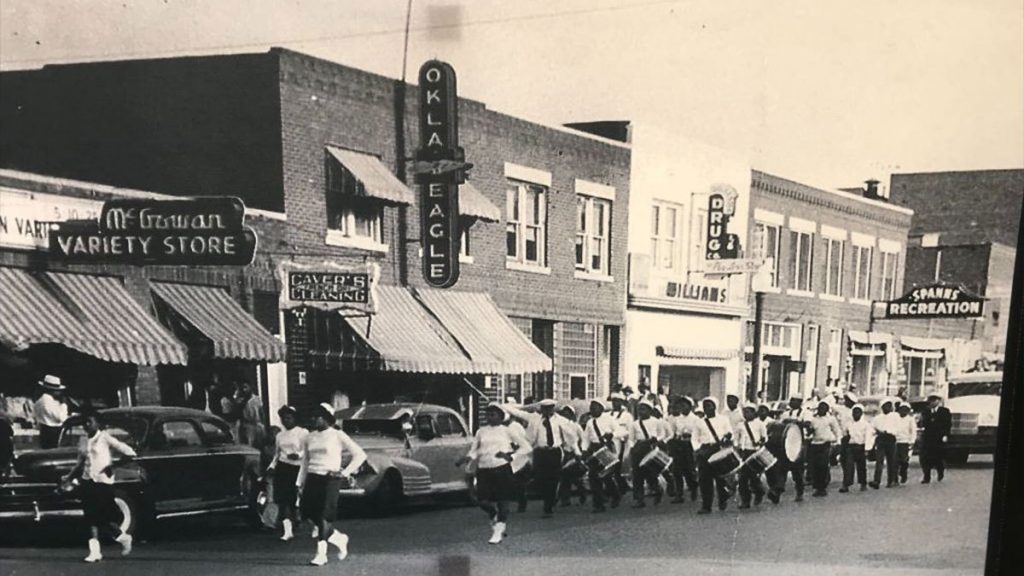 Pre-massacre Greenwood was, says Johnson, “much more of a ‘Black Main Street’ than a ‘Black Wall Street.’ It was not a financial and investment center. Rather, it was a small business and entrepreneurial sector created out of necessity, because of the segregation that dominated the state of Oklahoma and indeed, the United States of America during this period.”

The destruction of homes and businesses in Greenwood “interrupted intergenerational transfer of wealth that might otherwise have occurred in Tulsa, Oklahoma — which might otherwise have affected the trajectory of the community. Tulsa might have been something like what Atlanta is today, perceived as a Black mecca for economics and entrepreneurship.”

“A Culture of Silence” – or, why you didn’t learn about this in school

For decades, the massacre was rarely talked about and almost never taught in official histories.

“There are many different ways to respond to historical trauma. A culture of silence is one of them,” said Alicia Odewale, an assistant professor of anthropology at the University of Tulsa. Odewale notes that the “culture of silence” persisted for both Black and white Tulsans – but for different reasons.

For some but not all Black people in the city, “that silence stemmed from the fact that there was never any justice or accountability. For a long time, there was a lingering fear that an attack could happen again at any moment because no one ever answered for the killing and looting and arson and bombing.”

“The White city fathers realized they had a big PR problem,” Scott Ellsworth, a historian and the author of the new book, “The Ground Breaking: An American City and Its Search for Justice,” told the Los Angeles Times in 1999. “So they very soon put out the notion: Tulsa is shamed by that event, and we’ll put it right. But what really occurred, for 50 or 75 years, was, if not a conspiracy of silence, a culture of silence” that sought to conceal guilt.

As the Human Rights Watch report notes, “Following the massacre, government and city officials, as well as prominent business leaders, not only failed to invest and rebuild the once thriving Greenwood community, but actively blocked efforts to do so.”

Officials and scholars ignored the event for many decades, but slowly – starting in the 1970s and 80s – this “culture of silence” around the massacre began to break. According to the Oklahoma Historical Society,

In the early 1970s, a journalist named Ed Wheeler began studying the massacre at the suggestion of a local Tulsa editor. Refused by the publication Wheeler wrote the piece for, he ultimately published in a small periodical called Impact. In 1982, Scott Ellsworth wrote a comprehensive history called Death in a Promised Land: The Tulsa Race Riot of 1921. As this work attracted more attention and scholarship of the Tulsa Race Massacre, more articles and books followed.

Resources to Learn – and Teach Others

One hundred years later, why is it so important to share the story and understand the legacy of the Tulsa Race Massacre?

Because the world we know today was shaped by “things that happened before we were here,” says Rev. Dr. Eric Gill, pastor of operations at Tulsa’s Metropolitan Baptist Church, “and if we aren’t intentional then history will begin to repeat itself, over and over again… You can’t know where you’re going unless you know where you’ve been.”

On this 100th anniversary of the Tulsa Race Massacre, we invite you to explore the following resources curated by our sister organization, OCCJ.

“A century after the Tulsa race massacre, ‘you still have a community that’s struggling’.” (CNN)

“Greenwood Rising: #TulsaTriumphs” – a short video of Tulsan’s reflecting on their journey of learning about the 1921 Tulsa Race Massacre. Produced by the Oklahoma Center for Community and Justice (OCCJ).

“Dreamland: The Burning of Black Wall Street” – a new CNN documentary that explores the history of Black Wall Street and the violent events of late May and June 1921 in Tulsa, Oklahoma, that resulted in the slaughter of hundreds of the city’s African American residents.

1921 Tulsa Race Massacre Centennial Commission (a wealth of resources, including curriculums and literature)

“The case for reparations in Tulsa, Oklahoma” (Human Rights Watch)

Hannibal Johnson’s book “Black Wall Street 100: An American City Grapples With Its Historical Racial Trauma.” As was noted of this volume by Dr. Scott Ellsworth of the University of Michigan’s Department of Afroamerican and African Studies: “The remarkable story of Tulsa’s African American community and the racial cataclysm of 1921 bear important lessons for us all. Few know these better than Hannibal B. Johnson. [This book] is essential reading.” NPR Interview here.

Hannibal Johnson’s book “Black Wall Street: From Riot to Renaissance in Greenwood District.” This book traces the history of Tulsa’s African-American community, renowned nationally in the early twentieth century for its preeminent Black entrepreneurs. Tulsa was the site of the worst race riot in American history in 1921. Some 300 people were killed and property damage ran into the millions. Tulsa’s African-Americans overcame. The Greenwood District was rebuilt and, by 1942, boasted 242 Black-owned and Black-operated business establishments. The book is a testament to the human spirit.

*Note from OCCJ (Oklahoma Center for Community and Justice): “Hannibal Johnson was our Anytown Director for 14 years!”