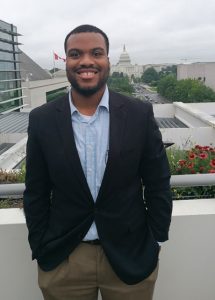 He went to ANYTOWN as a high school student in 2013.

What he’s up to now

How did you find out about ANYTOWN?

I found out about ANYTOWN through an ANYDAY session and I attended the Youth Leadership Conference before I went. On top of that, my high school counselor kind of pushed me to go and apply.

How did ANYTOWN shape your high school experience?

ANYTOWN helped me shape the basis of the anti-bullying club, which turned into the diversity club at my high school called “The Every1 Club.” We did programming around anti-bullying and breaking down barriers that prevent people from getting to know each other. ANYTOWN taught me that the way we begin to change the world is by getting to know people and see their humanity. So, we tried to echo that in our club.

Did ANYTOWN influence where you went to college, or your choice of major?

My major is Human Service Studies and the lessons I learned attending ANYTOWN play a huge part in my major because it’s all about working with people. Just like ANYTOWN, my major is teaching me how to work with other people and tapping into their strengths to help them with the problems they face in their community. I’m seeing the importance of diversity, creativity, listening, and working in collaboration with others – all things I was introduced to at ANYTOWN.

How has ANYTOWN shaped your career choices?

How has ANYTOWN shaped you as a person?

ANYTOWN made me realize how privilege works in the dominant factors of life. I remember the Sunday after I got off the mountain, I was in church and I was crying because it didn’t make sense how school breaks fall around major Christian holidays, but those in other religions must send a note to school asking for time off for their major holidays. I remember calling Christianity the “bully religion.” Obviously, I’ve grown a lot and reconciled that, but it just made me more aware of all the differences that make our world a pretty interesting place to be. It also made me want to work harder for those who are not represented, not only so they can have a seat at the table for important, transformative decisions, but also so we can see them as people and see their humanity.

What would you say to a parent/guardian who is considering sending their child to ANYTOWN?

Just do it. We live in a world where students need to know the importance of the diversity, the importance of working with others. Being exposed to other cultures, ways of life, talents, strengths will prepare students for life after high-school. So, do it. They’ll work with you to make sure your kid can get on the bus and go up the mountain and come back down a better citizen.