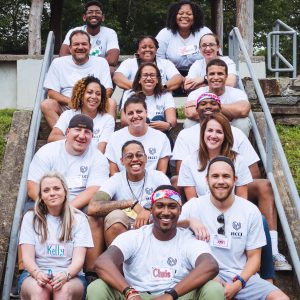 Mike Marshall has been a school counselor at Northwest Guilford for 4 years. He’s seen firsthand the impact that ANYTOWN Ambassadors (graduates of ANYTOWN who are still in high school) have on Northwest’s school climate. Since 2017, Mike has volunteered as an adult advisor at ANYTOWN.

How long have you been involved with NCCJ and ANYTOWN?

Has ANYTOWN made you show up differently at school?

YES! The things I’ve learned sitting in sessions and trainings at ANYTOWN have absolutely affected the way I do my job. I’m more knowledgeable about a lot of topics thanks to ANYTOWN (especially LGBTQ+ issues), and can apply these things I’ve learned to further help my students!

How have Ambassadors stepped up as leaders at Northwest?

How has ANYTOWN made individual students show up differently?

Yes! One student in particular has struggled as a transgender student. I watched him at ANYTOWN go from a student who was struggling with his identity and unsure of himself, to finding a community of peers who maybe weren’t trans, or gay or bisexual, or anything else but still opened their arms and accepted him as he is regardless. I watched him evolve in that week, and I know that experience gave him the confidence to embrace his true self and he’s been living that ever since he’s been back. As a byproduct of that, his grades have improved DRAMATICALLY, he’s become more involved with his school, has a wider group of supportive friends and seems to be thriving. ANYTOWN gave him a safe environment to be his authentic self and realize that people would love him no matter what and it’s made all the difference.

Have there been any changes in how the student body interacts with each other?

Northwest is a big school, so affecting the student body as a whole is a large task. What I do see my students doing is helping make small changes in their classes or friend groups which hopefully will act as the pebble in the pond, to create ripples of change throughout this large student body.

Have you all had other programs (like ANYDAY) at Northwest and what have been the impacts of it?

We did a combined ANYDAY with Northern High School last year and it was very well received. The students appreciated hearing the thoughts and stories of kids from others schools and they requested to “do that again” and so we will hold our second ANYDAY with Northern in November again this year!

If you could tell parents one thing about ANYTOWN, what would it be?

It’s transformational in the very best sense of the word. If I told you that ANYTOWN could make your children infinitely better human beings in just five days and that transformation would have a lasting impact on their rest of their lives…..wouldn’t that be worth it?

ANYTOWN is for everyone. It’s not just for “gay kids” or “trans kids” or the kids who get bullied. It’s for the bully AND the kids who get bullied. It’s for the gay and the straight, or the kids who aren’t quite sure. It’s for every race, every nationality, every religious view, because we welcome everyone… so that everyone can learn from everyone else. ANYTOWN is a bubble and for 1 week, we create the world we’d all like to live in. It’s a gift and a pleasure to be a part of it.