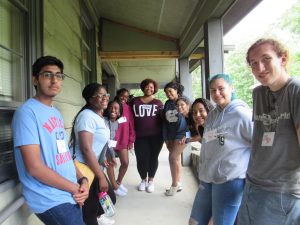 Jasmine has been a school counselor at Grimsley for 6 years. She’s seen firsthand the impact that ANYTOWN Ambassadors (graduates of ANYTOWN) have on Grimsley’s school climate.

How long have you been involved with NCCJ and ANYTOWN?

I went up to Blowing Rock for the first time as an Advisor in the summer of 2014. Since then, I’ve been privileged enough to go up a few more times as an Advisor and Mental Health professional.

Has ANYTOWN made you show up differently at school?

ANYTOWN has definitely influenced the way I interact with students and faculty at Grimsley. There were issues that I was not even really aware of that were happening in my school until ANYTOWN delegates brought them to light for me. Going to ANYTOWN is like getting a second set of eyes for your school community. I also approach things from a different angle, knowing that I am working with families whose struggles may be compounded by lack of privilege in certain arenas. I similarly know that for some people, their identity is never validated in any other space, so it’s important that I recognize them and show up for them in an affirming way.

How have Ambassadors stepped up as leaders at Grimsley?

I can truthfully say that my Ambassadors are leaders in my school! They have positions as Club Presidents, Community Service Organizers, Student Council. They are the ones that I look to when I need help on planning or execution and they have always been up for the task. The beauty is that they can apply what they’ve learned at ANYTOWN while doing work at our school. They aren’t just in it for the service hours—they really have a vested interest in shaping a school community that all of us want to be a part of.

How has ANYTOWN made individual students show up differently?

I think the knowledge of ANYTOWN and what it is, having ANYDAYs on campus, having NCCJ come in and lead workshops and assemblies—all of those things have given students a voice and helped shape a student community that is very inclusive. Students are better advocates, they help to educate their fellow students and faculty, and I think they are less afraid to be themselves. Of course, we are not perfect, but I often hear from students that the culture at Grimsley is much more accepting than other places they have been.

If you could tell parents one thing about ANYTOWN, what would it be?

ANYTOWN can really be a life-changing experience for your student. This isn’t a program designed for one type of student – it’s for everyone. Send your students! It really is magical up on the mountain.

I love ANYTOWN and my NCCJ family. I’m grateful to get to be a part of such an awesome program. I have found lifelong friends through my work with NCCJ and every year I am able to see growth in myself because of it. I am a better counselor and a better person because of ANYTOWN, and I hope others will be able to experience it for many years to come.