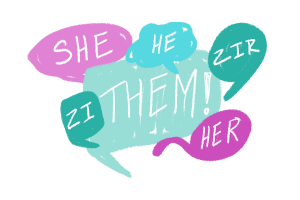 Inclusion takes intention. At NCCJ, our intention is to be inclusive of all people and respectful of all identities – no exceptions.

Yet, on their own, good intentions are not enough.

To create truly welcoming spaces, we must translate our intentions into actions. Before we can show respect for someone’s identity, first we must see them for who they are.

One of the most common ways to exclude someone, consciously or unconsciously, is to misgender them. “Misgender” means to refer to someone using a word, such as a pronoun (“he” or “she”) or form of address (“Ms.” or “Mr.”), that doesn’t match their gender.

Gender and sex aren’t the same.

According to the World Health Organization,” ‘Gender’ describes those characteristics of women and men that are largely socially created, while ‘sex’ encompasses those that are biologically determined.”

The National Institutes of Health (NIH) Office of Research on Women’s Health (ORWH) gives a more detailed definition: “Sex” refers to biological differences between females and males, including chromosomes, sex organs, and endogenous hormonal profiles. “Gender” refers to socially constructed and enacted roles and behaviors which occur in a historical and cultural context and vary across societies and over time. All individuals act in many ways that fulfill the gender expectations of their society. With continuous interaction between sex and gender, health is determined by both biology and the expression of gender.”

As we like to say at NCCJ, gender and sex comes down to “hearts vs. parts.” 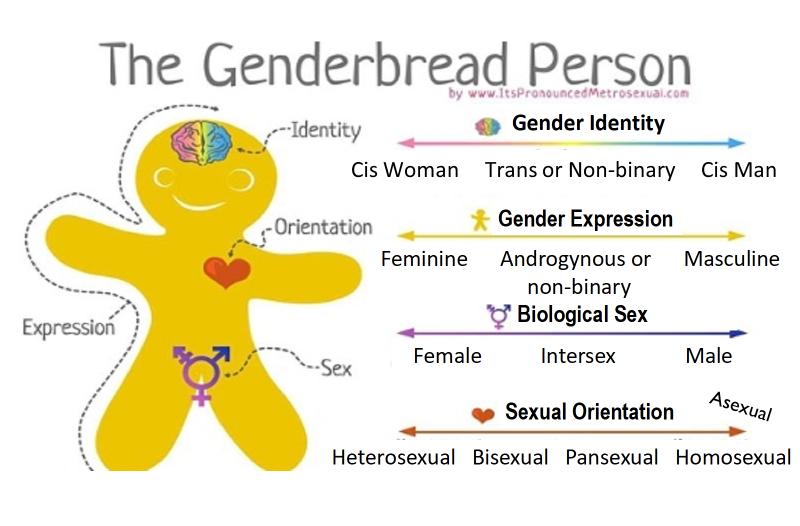 Sex = parts, which means it’s something you’re born with (it’s determined by your chromosomes, so it’s literally coded in your DNA.) Sex is usually binary (male or female) but some people are born intersex, which means their chromosomes aren’t XY or XX. (Note: being intersex is not the same thing as being transgender. Click here for more information about intersex people.)

Gender = hearts, which means it’s how you feel on the inside. It’s your innermost feeling of being boy/man, a girl/woman, or a blend of both – or neither.

Historically, gender has usually been considered binary (a person was either a “man” or a “woman.) Today, gender is commonly understood to be a spectrum, meaning that “man” and “woman” are two polar ends of a spectrum, but people can – and do – identify outside of those “boxes.”

Think about it – how often have you heard someone called a “tomboy” or “effeminate”? Most of us don’t fit entirely in one “gender box” or another.

In short, sex and gender are two different things. Your gender identity can be the same or different from the sex you were assigned at birth. Sometimes a persons’ sex and gender “match up” (when that happens, we say that a person is “cisgender”) but sometimes they don’t. Just because someone is biologically male or female doesn’t mean they identify as a man or woman. Click here to learn more about the spectrum of gender identity and expression.

In short, sex and gender are two different things. Just because someone is biologically male or female doesn’t mean they identify as a man or woman.

Our eyes are taught to see what they’ve been conditioned to see. We look at a person and quickly assess – are they short or tall, blonde or brunette, man or a woman?

But unlike height or hair color, gender is an aspect of identity that can be difficult to “see.”

While we can’t help sorting people in categories (that’s just how human brains work), being inclusive means actively working to unlearn some of the biases and prejudices that lead us to make assumptions about people.

We can look at someone and assume that they are a man, based on their haircut or clothing or dozens of other features and cues that our brain has learned to associate with men, But what if we’re wrong?

Pronouns are substitute words like “she” or “this” that can stand on their own to refer to a noun (a person, place or thing.)

(NCCJ’s program manager, María, has this encouraging note to share: “Being attentive to correct gender pronouns is easier in English than it is in many other languages. That’s because in English, only people are gendered. In some languages – like my first language, Spanish – even objects are gendered. You can do this, English-speaker!”)

In English, the most common pronouns used to identify people are “he” or “she.” These options are gendered; they indicate whether we identify people as men or women based on our ideas about gender roles and our assessment of their physical attributes.

However, as we just discussed, the assumptions we make when we look at someone aren’t always accurate. Many people simply don’t identify with gendered pronouns like “she” and “he.”

Some people prefer the gender-neutral pronouns “they/them.” You already use these pronouns (the “singular they”) when you’re talking about someone whose gender identity you don’t know. For example, “Oh no, someone left their backpack. I hope they remember to come and get it.”

Others identify as “ze/zir” – for example, “Meet my friend Dana. Ze is a musician and zir favorite instrument is guitar.” (these are called “neopronouns” and yes, they are real words! Click here to learn more.)

Why do pronouns matter? 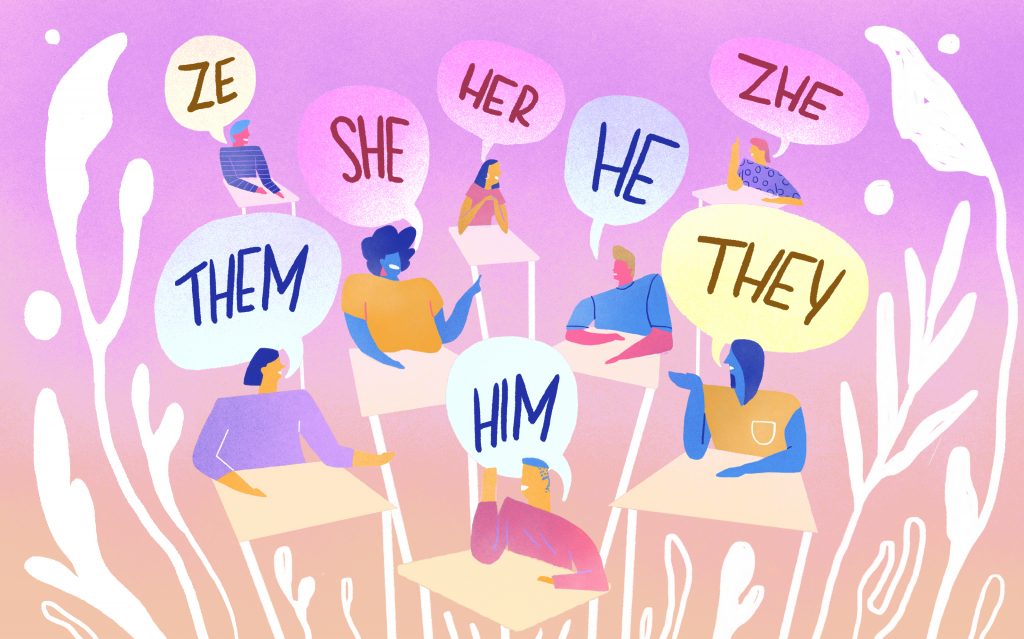 Our pronouns are part of our identity. Just like our race, religion, and sexual orientation are ways in which we identify ourselves, our gender pronouns work in the same way. They reflect how we think of ourselves – and how others see us.

When you refer to another person using the wrong pronouns, it can be an act of oppression and violence (“violent” because it can lead to dysphoria, exclusion and alienation. Click here to learn about gender dysphoria.)

Honest mistakes happen (more on that in a moment) but when we intentionally use the incorrect pronouns, we are actively choosing to ignore a person’s identity. In effect, we’re telling them that they aren’t important enough for us to acknowledge. And when we refuse to use gender-neutral pronouns like “they” or “ze”, we’re sending the message that anyone who identifies outside the boxes of “he” or “she” doesn’t matter.

In short, referring to someone with their preferred pronouns is a simple yet powerful way to show that you respect them.

And for trans people, pronouns can be a matter of life and death – literally.

Click here to hear about the importance of pronouns for trans people.

What happens if I don’t know a person’s pronouns?

We shouldn’t go around assuming a person’s gender identity simply because of their physical attributes. If we see someone who looks more feminine, we might assume they use “she/her/hers” pronouns, but this is not necessarily the case.

If you aren’t sure, you can use gender neutral pronouns like “they/them” to avoid disrespecting or misgendering someone.

Sometimes it’s OK to ask, “What are your pronouns?”

But asking people to share their pronouns can be inappropriate, depending on the context. Read more about it here.

What happens if I make a mistake?

Mistakes happen – we all make them!

When you make a mistake with someone’s pronouns, just apologize, correct your mistake, and move on.

If someone corrects you on their pronouns, don’t take it personally. This can be tough (no one likes making mistakes, and it can be embarrassing to be “called out” for one), but it’s super important! Try to keep in mind that the person correcting you did you a favor; you didn’t know, but now you do. Gracefully accepting correction is a wonderful way to be an ally and demonstrate inclusivity, no matter the situation.

When you make a mistake with pronouns, just correct yourself and make a mental note to use the correct pronouns in the future.

How do I use gender-inclusive language?

The English language is heavily gendered.

Gender shows up a lot for English speakers, and not just when it comes to pronouns. The way we speak can sometimes exclude people who identify outside the gender binary. Consider phrases like:

We aren’t telling you to stop using these phrases. We’re pointing them out because they’re good examples of some of the ways we (often unintentionally) reinforce the gender binary

Interested in shifting your language to be more gender-inclusive? Start by clicking here for a short guide, then check out this more comprehensive guide to inclusive language. 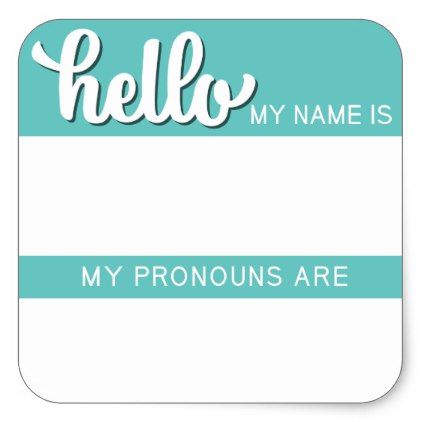 When it comes to gender pronouns, a little effort goes a long way toward creating more inclusive and compassionate communities.

First and foremost, using the correct pronouns to refer to others is a simple and powerful way to show that you respect them.

Second, share your pronouns if you’re comfortable doing so. Include them in your email signature, your bio – anywhere you’re introducing yourself to others. It’s an easy way to show other people that you respect them for who they are (that’s a theme here, have you noticed?) and that it’s safe for them to share their pronouns with you, without fear of judgment or violence.

Resources we linked above: