Reflections on 85 Years of NCCJ 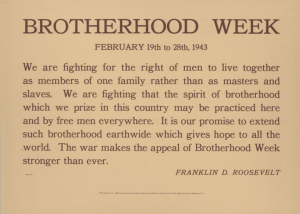 In 2022, NCCJ is celebrating our 85th year serving Triad communities. We were founded in 1937 as a local chapter of a then-national organization that had its roots a decade earlier, in the 1920s.

Today, as we reaffirm our dedication to fighting bias, bigotry and racism and building more inclusive and compassionate communities, we reflect on our origins and consider what they can teach us about our present – and our future.

Listening to the news or scrolling through social media, it can feel like we are more divided than we’ve ever been before.

It can feel that way – but it’s not true.

The story of our nation is also the story of a series of social and economic upheavals.

NCCJ was born from one of those eras.

The first world war and a global pandemic had upended social structures and systems.

At the same time, fascist movements were on the rise.

These included the Ku Klux Klan, which championed the interests of white Protestant Christians and demonized other Americans – especially Black people, Jewish people, and Catholic people.

Many Americans were drawn to these hateful ideas.

But many were strongly opposed.

NCCJ’s co-founders were a broad coalition of people from many walks of life, including some folks you’ve probably heard of like the social reformer Jane Addams and U.S. Supreme Court Justice Charles Evans Hughes.

Their goal was to de-escalate tensions and promote tolerance by creating opportunities for respectful dialogue between different groups of Americans.

In the words of historian Kevin M. Schultz, their vision was for “a new kind of America. It was a pluralist vision, and it was intended to be nationally all-inclusive.”

This vision caught on and NCCJ quickly become a leading organization in the growing movement to advocate tolerance.

One of NCCJ’s most famous early efforts was a group of three faith leaders – a minister, a rabbi, and a priest – who called themselves the Tolerance Trio.

In the early 30s, the Trio would travel the country, rent out halls and talk to audiences about the stereotypes of Jews being overly interested in money and Catholics wanting to overturn democracy.

They would make jokes, and it was entertainment.

People would learn how false these stereotypes were.

And they would preach tolerance and mutual respect.

The idea was to model how people of different faiths could encounter each other respectfully – and show that these were three equal religions.

It was so popular that it spawned more of these trios, which ultimately led to the creation of a National Brotherhood Day in the 1930s, timed to coincide with George Washington’s birthday to underscore the (quote) “Americanness” of the day.

By 1936, Brotherhood Day was expanded to a week, with President Franklin D. Roosevelt as the first honorary chairman.

(As a side note – the national Brotherhood Week would later evolve into annual community events like this Brotherhood / Sisterhood Citation Award Dinner.)

By 1941, NCCJ had established permanent local roundtables to hold community dialogues between Protestant, Catholic and Jewish people in over 200 cities – including Greensboro, where a group of local leaders established our NCCJ in 1937.

In 1941, the sociologist Alfred McLung Lee credited NCCJ with creating enough social change to help ensure that the Great Depression era “did not produce an integrated, ‘financially successful’ intolerance movement like the Ku Klux Klan of the post-World War I period.’”

Instead, Lee found that NCCJ had been successful in shifting the national discourse to create what he called “a mood new in the history of human relations in the United States.”

Of course, the past never maps directly to the present. But as the saying goes, “history doesn’t repeat itself, but it often rhymes.”

We’re confident that you can connect the dots and appreciate why we chose to tell you this story about NCCJ’s creation and original purpose.

But we will spell it out anyway – NCCJ’s approach for de-escalating tensions and promoting tolerance works.

That’s because once you sit down with someone to have a respectful conversation and you get to know them, it becomes so much harder to stereotype – or dehumanize – or hate them.

When enough of us embrace a “nationally all-inclusive” vision, we can turn the tide away from hate and toward tolerance and compassion.

We know we can do it – because we’ve done it before.

Above text is excerpted from a speech written by Erika Rain Wilhite and delivered by Paul Ringel at NCCJ’s 2022 Citation Award Dinner.