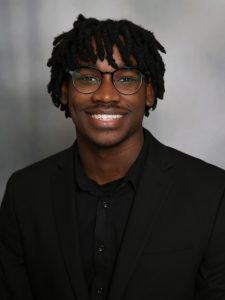 Malachi McMillan went to ANYTOWN in 2019. He just graduated from Southwest Guilford High School and will attend UNC-Charlotte in the fall of 2021. Here’s what Malachi had to say about ANYTOWN and how it shaped his senior year and college plans.

I was invited to an ANYDAY in my sophomore year, and that’s how I found out about ANYTOWN. The ANYDAY was for a small group of people and I was interested in those conversations that I wasn’t having in school, and in being in that type of environment. Later that year I went to the Youth Leadership Conference and had a lot more discussions and met a lot more kids. That was when I decided I wanted to go to ANYTOWN. I got some friends at school to sign up, too, and the three of us came to ANYTOWN last summer.

ANYTOWN is the most genuine experience I’ve ever had. Everyone was there for each other. It felt like a home. It’s one of those things where you don’t expect a group of random students to be able to constantly and consistently mesh together and have these difficult conversations – especially not in 5 days!

Everyone thinks they know a lot about bias, bigotry and racism. I felt like I knew about that stuff, but I didn’t acknowledge that everyone has their own story and that it affects what they do and who they are. And now I know, every time I meet someone, that I’m going to have prejudicial thoughts and assumptions about people and that’s normal. But ANTYOWN taught me that everyone has a story and everyone is facing an obstacle and challenges.

“After ANYTOWN… the way I interact with other people has changed.” 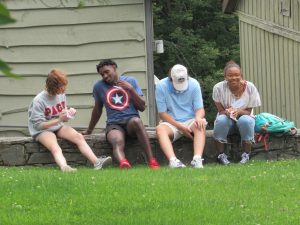 I want to push past my first thoughts so I can hear their stories and understand them. I think I value others more. I valued people before ANYTOWN, but now I feel like I value other thoughts, ideas and perceptions more. So I started to expand and recognize the fact that every idea is a deserving idea based on that person’s experience. Everyone has something to contribute and give to whatever effort we are working toward. That’s one of the biggest things that changed about my high school experience, and I’ve made an effort to incorporate that into my leadership style.

This year was so rough – the first semester was a lot. Of course, I was an ANYTOWN Ambassador. I also volunteer at the Learning Center, I had a part time job, and my main extracurricular activity was being on the Mock Trial Team. You prepare for 4-5 months for a case you actually have to argue in a real courtroom. I’ve been doing this since I was a sophomore and my team has improved every year. I was junior vice-president my junior year, and president my senior year. This year, I was prosecution, and my team won. But the other team also won. It’s score out of 10 – direct examination, cross examination, opening and closing statements, and the judges evaluate that and give you a score.

I was a project leader in my school’s Black Cultural Awareness Club last year, and this year I became co-president with [fellow ANYTOWN alumni] Eli. We also started a connected group called Pride Lands Movement for Unified Justice and Action to promote black cultural awareness club by fortifying it with a more diverse perspective on Black people, Black culture, and Black history, and make it more applicable to a wider range of people. We started talking about it last summer and it really kicked off in November and December, after my trial finished up.

“For Black History Month, we hit the ground running. I used a lot of what I learned at ANYTOWN last year, including a book one of the advisors recommended, Revolutionary Suicide by Huey P. Newton.” 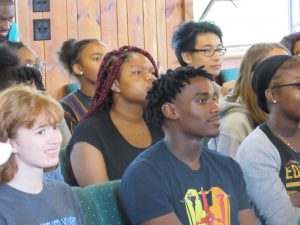 Every day for the entire month of February we would make morning announcements to the school about some aspect of Black history we found important, always ending with a quote. Our theme for the month was the Black vote.

We tried to go beyond the typical approach to talk about Black history (that Black people are important and here’s why, here are these things a Black person has done or accomplished) to instead talk about it with a lens of “this is how this applies to you, this is how it affects you” for all people. For example, we talked about the principles of the struggle for the Black vote and how those ideas of hard work, grit and determination, and why it’s so important to use your vote, apply to everyone. They contribute to the greater good, because Black people didn’t just fight for their own rights.

We also did a Black history production, and it was a great show on the same theme – talking about what the Black vote means to everyone, how ours is a great voice that deserves to be heard, but also how everyone has that voice, and we all have to fight for it. For the production, I made sure to include a sophomore in leadership and worked with him to help get him ready to lead the club next year.

Recently, I had a finalist interview for UNC Charlotte’s Levine Scholars Program, which is a full ride scholarship, and I think 40% of what I talked about was ANYTOWN and the Pride Lands club. I think about 3,000-4,000 people applied and they only picked about 20 of us. I got the scholarship. I credit a lot of that, a lot of the path I’ve taken that led me here, to ANYTOWN and my experience as an Ambassador.

“More than anything, ANYTOWN is an opportunity. It’s an opportunity for growth unlike any other. It’s so accessible, it’s so affordable, and it’s so special because it brings so many different people together. It offers a unique experience that I think should always be here and available for people. The longer this program goes on, the more people who can participate, then the more positive change you can make in the world.”