Decolonizing History in the Classroom: Thoughts and Resources 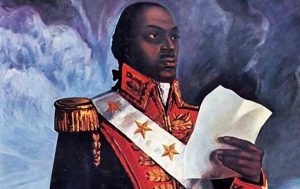 First, something to think about.

Did you learn about Toussaint L’Ouverture (pictured) in history class? Inspired by the American and French Revolutions, he led the Haitian Revolution (1791-1804), the most successful rebellion by enslaved people in the Americas and the only modern “slave revolt” that led to the formation of a state. His story shares parallels with those of contemporary revolutionaries like George Washington and Napoleon Bonaparte.

Did you learn this story growing up? If you didn’t, ask yourself – why might that be?

It’s a big question. Let’s start with considering who told the stories you grew up hearing.

(You can learn more about Toussaint L’Ouverture and the Haitian Revolution here.)

The Problem with a One-Sided History

To understand the problem with a one-sided history and its implications, let’s take a moment to travel to our childhoods. Your older sibling is telling your parents the story of how the flower vase ended up shattered on the floor.

As your sibling starts telling the story, you begin to notice that pieces of the story are missing – mainly the piece where it was their fault and not yours or the dog’s. Shocked and offended, you stand there just listening.

You want to chime in and add your recollections for the record, but you don’t know how to do that – and even if you did, you suspect your parents might believe your older sibling’s version of the story because they told it first. Or maybe just because they’re older.

This is obviously a very simplified example, but it’s often helpful to simplify complex subjects so we can wrap our minds around them. Sometimes our simplified ideas about these complex subjects have become so normalized that we don’t even realize we never learned the whole story.

In this analogy, your sibling is the colonizer. In order to decolonize this story, your version of it needs to be heard – preferably before your sibling’s version gets told to the rest of the family, and definitely before that story begins to be told for generations to come without anyone ever asking you to tell your version of what happened.

One-Sided Stories in the Classroom

I’ve just taken you to a school classroom in the United States.

For generations, we’ve heard stories being told by “the older sibling” in the example I described above. In real life, this happened on purpose. It was not an accident. If you’re on social media, you might’ve come across the following post on Juneteenth: 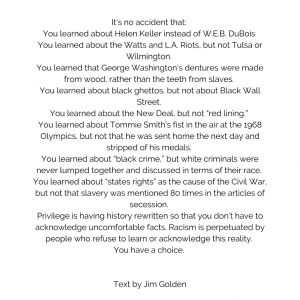 As educators and parents, we must be purposeful about the information that we pass down. We help create and shape the realities in which young people develop. We tell the stories (often the stories we were told) they grow up believing. We have a lot of power – and with that power, the responsibility to use it wisely and intentionally.

We often think about future generations as the ones who change the world and create radical change and history has taught us that that is often the case. It’s true that young people are often at the forefront of social movements, but that doesn’t mean other generations can just sit on the sidelines and watch them go by. We must all take part in the dismantling of oppressive systems that were created decades or even centuries ago.

How Can You Take Action to Decolonize History?

One way to do this is through education. Historian Julian Hayter says in this article that “we wouldn’t have a Black Lives Matter movement if Black lives mattered in the classroom.” Right now if you opened a history book used in an American classroom, you would learn about history primarily, and often exclusively, from the “big sibling’s” perspective we mentioned above.

This parent is taking advantage of the extra time at home with her children during the pandemic to decolonize and reconnect. Angela Aguilar provides the activities she’s done to “unlearn” what she was taught along with her children and to introduce self-awareness. Having conversations with young people about who they are and where they are is a good way to include other perspectives within the narratives we’ve been taught for decades. Teaching them about the land we stand on and who it belonged to for longer than just a couple pages in a textbook is important in this process of unlearning.

Ineese-Nach, of Cree and Ojibwe heritage says in this article that “colonialism perpetuates this normalization of the system that we’ve all just accepted as being the singular truth, when actually there are multiple truths.” She points out that decolonizing efforts are not part of a checklist, there is no end point, it is a process we must actively engage in.

Our first duty is to engage in our own self-awareness practice of thinking about the times we’ve upheld a system that has not been inclusive. However, educational developer Curtis Maloley warns that once they’ve taken this step, educators often steer away from incorporating indigenous perspectives into their curriculum out of fear of appropriation and misrepresentation. This fear only supports “the lack of relationships that we have with Indigenous colleagues and communities.” This piece of collaboration and trust is crucial for identifying colonialism in our institutions.

You Can Start Now: How the Lost Cause Movement Rewrote the Story of the Civil War

To be active in decolonizing practices in the classroom means we need to look closely at who has been in charge of creating educational materials (like history books) for our communities in the past. In other words, we need to look at who told the stories we’ve learned.

You can start now by learning about the Lost Cause movement – an excellent example of the one-sided history we’ve been talking about. Watch this video and check out the accompanying article that explains how white Southerners intentionally rewrote the history of the Civil War at the turn of the 20th century as part of a concerted effort to enact white supremacist laws and policies and strip Black Americans of their civil rights.

Spearheaded by the women’s group United Daughters of the Confederacy, the Lost Cause movement “targeted children growing up in the South, so they would develop a personal attachment to the Confederate cause.” One way they rewrote history was to form textbook committees to control the information included in children’s history textbooks and pressuring school boards to “ban books that the UDC deemed ‘unjust to the South,’ which was anything that shed negative light on the Confederacy.” In doing so, they erased or minimized Black history and portrayed slave holders as kind and empathetic.

Black history should be taught throughout the year, not just in February. As Rann Miller points out, “black history isn’t a gimmick meant for one month out of the year, with a student assembly or a potluck dinner with traditional black foods. Black history is American history.” He notes that we spend a lot of time teaching Twain, Dickens and Shakespeare in the classroom, but we rarely spend more than a day on Hughes, Angelou or Morrison. Miller’s article shares ideas you can use to create more inclusive lesson plans in all core classes.

Always remember that systems are not created by accident; they have a purpose. These norms and practices we are working to change were not an accident. They were intentional. This means they must be intentionally dismantled and rebuilt.

Below, we’ve shared the articles cited above and some additional antiracism resources for parents and educators. To help with planning more inclusive curriculums, we also highly recommend the resources and lesson plans curated and offered for free by Teaching Tolerance, a project of the Southern Poverty Law Center.

Additional Resources for Parents and Educators: