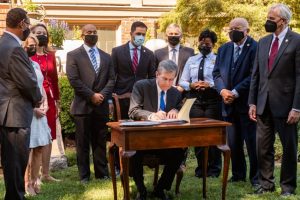 The bill included several key provisions recommended by the Task Force for Racial Equity in Criminal Justice (TREC) after the group convened for an extensive series of NCCJ-facilitated meetings between June and December 2020.

Led by Attorney General Josh Stein and NC Supreme Court Justice Anita Earls, the TREC consists of 24 members from a wide range of backgrounds and perspectives. The Task Force was tasked with identifying policies and practices that disproportionately affect communities of color.

Notably, the legislation received bipartisan support and support from groups with opposing views, such as law enforcement and criminal justice reform organizations.

As stated in a press release issued by Cooper’s office,

“Senate Bill 300 makes important changes to improve policing and criminal justice in North Carolina, as recommended by TREC, including:

Now, Michael and Karen are reflecting on their work guiding the Task Force’s diverse members toward finding common ground as they developed a set of recommendations to ensure racial equity in North Carolina’s criminal justice system.

“As facilitators,” says Michael, “our primary role was meeting management and being accountability partners. We provided structure to consensus-building processes where needed, as well as being the eyes and ears for Task Force members, Co-chairs Earls and Stein and their support team, to ensure that all voices and perspectives were heard. We helped all parties navigate intense and complex work over the 6 months we met with the Task Force.”

“I was extremely honored to have the opportunity to work with the 25 members of the Task Force,” says Karen Dyer.

“Supporting these highly committed individuals, many of whom have dedicated their lives, careers, and reputations to public service ensuring justice for all North Carolina citizens, was not only meaningful but profoundly significant.”

In addition to their expertise as facilitators of difficult conversations, Michael and Karen were each able to draw on their own extensive knowledge of racial equity topics to help the Task Force members reach common ground.

Karen explains, “I believe that our role evolved into assisting the members in navigating complexities surrounding such topics as:

Facilitating the Task Force meetings was also a learning experience for Michael and Karen.

Karen says, “I learned so much about the history, current and past practices, and the impact of structural racism on our laws and institutions. What I experienced was an overwhelming commitment on the part of individuals from various backgrounds and perspectives to foster a more fair and just future for North Carolinians.  I’m so grateful and appreciative to have been a part of such important work that continues to manifest making a difference.”

Michael agrees: “It was an honor to be a part of such a large-scale effort to bring about much needed equity in our criminal justice system. Seeing this legislation come to fruition because of the hard work of task force members, and knowing that we had even a small part in making that happen, is gratifying.”

NCCJ is proud of the work the Task Force has accomplished and grateful to see some of their recommendations go into effect with the passage of Senate Bill 300. We are grateful for the opportunity to help guide these critical conversations, and hopeful that this legislation will be the first step of many to come as we collectively work toward greater racial equity and accountability within our criminal justice system.

We encourage you to learn more about the Task Force and its recommendations by reading the TREC final report here, the executive summary here, and the recommendations chart here.